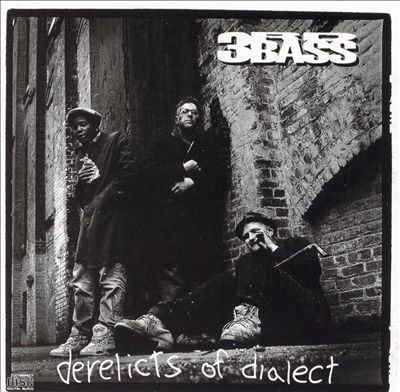 After the Beastie Boys jumped the Def Jam ship in early 1989, 3rd Bass had become the record label’s ‘Great White Hope’ mk II. The New York trio’s 1989 debut ‘the Cactus Album’, came out of nowhere to surprise the ‘authentic’ hip hop community and strike Gold. The pressure was then on for MC Serch, Pete Nice and DJ Richie Rich to produce a follow up to the unlikely hit LP.

In 1991, ‘Derelicts of Dialect’ was released and met with mixed reviews, mainly due to it not being the Cactus Album. This is true and unfair. It isn’t the Cactus album, but that’s not a negative either.

‘Derelicts’ is an album of its time. It is early 90’s Hip Hop, and thanks to the bulk of production being outsourced to the legendary Prince Paul, has a heavy Native Tongues influence – ‘Ace in the Hole’ and especially ‘Herbalz in the Mouth’ could have been a De La Soul song from a 3 feet or ‘is Dead’ recording session.

The LP starts off with a DJ Richie Rich scratch intro (remember those?!) and pretty much ticks all the boxes you’d expect on the way to the finish.

This is no bad thing.

The jazzy yet street title track sets the tone. Industry weary raps ‘Portrait of an Artist as a Hood’, ‘3 Strikes to 5000’ and the 90’s ode-to-DJ album staple ‘Daddy Rich in the Land of 1210’ blend in with the haunting, racially aware ‘No Master Plan for No Master Race’ and finishes with the trippy, X-Clan dissing ‘Green Eggs and Swine’. Serch and Nice’s lyrics are filled with humour, yet pack a message without feeling too preachy.

The one track that sounds out of place, yet propelled the album to Gold selling status is ‘Pop goes the Weasel’. A track, dripping in irony (or self-awareness?), that went after commercial sellouts MC Hammer and Vanilla Ice, yet samples Peter Gabriel’s Sledgehammer, the Who and Stevie Wonder. It was a Billboard number 1 and was their biggest ever hit.

Other standouts include the bouncy but rugged, Chubb Rock assisted ‘Kick’em in the Grill’ – and the lively ‘Microphone Techniques’ featuring the massively underrated Nice & Smooth, with the former spitting more spectacular absurdity ‘Ayatollah, Saudi Arabia, Coca Cola, my Rolex watch is ran by solar’.

Overall, this is a solid album, regardless of its predecessor’s legacy. It is more easy to forgive it’s weaknesses now – it was chastised at the time for having too much of a Prince Paul influence but considering how reclusive he was by the end of the decade, it’s enjoyable to hear his signature sound again. Instead, Derelicts is a snapshot of early 90’s east coast rap when beats didn’t have to be soft and lyrics could be funny AND have a message without being corny or ‘positive’, as it was known back then.

New York’s soundscape would change in the next few years, of which Serch would play a huge part (I know who I paid, dawg, Serchlite publishing) and had the group released a few more albums, this would probably be more revered. Instead, it is the lesser known album in the small catalogue of an underappreciated group – so spread the word.