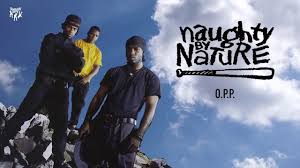 Some 25 years later, Naughty By Nature reveal the origins behind one of their classic Hip-Hop anthems.

Treach, Vinnie and Kay Gee, all hailing from New Jersey, rose to prominence in the 90’s on the Tommy Boy label.

The O.P.P track sampled the infamous Jackson 5 hit ‘ABC’ and was released in 1991 on their self titled album ‘Naughty by Nature’ and became an instant cross over hit.

Over the years there has been a lot of talk as to the true meaning and origin of O.P.P, but here we are in 2016 and Treach now reveals all. Treach goes on to state that the expression was an adaptation of an East Orange phrase from the streets.’The actual phrase ‘O.P.P.’ came about from an O.G. in our hood, [Mustafa] Brown. He always used to say, ‘I’m down with O.P.M. Other People’s Money.’ It would always get a big laugh. One day, and we didn’t even do it consciously, we said, Fuck that, we down with other people’s pussy, and other people’s property.’ Mu’ Brown never smiled, but he cracked up so much at what we said, that he shed tears. At the time, it wasn’t for a song, it was just a joke we had. We kept saying it, and the phrase just grew.’

‘Writing that song was just divine intervention,’ explained Treach. ‘The idea was really born in 1989 or 1990, probably a year before we started using the name Naughty by Nature.’ Previously, Naughty By Nature recorded a 1989 RCA Records Independent Leaders album as The New Style. ‘At the very beginning, I said to myself, ‘O.P.P. how can I explain it?’ I wrote that down and it stayed as the first line of the song. I wrote a verse at a time and just pieced everything together. It wasn’t an overnight thing. It took time. I had a notebook with catchy verses and phrases, and once I heard the music (for O.P.P.), I knew it would work with the concept. We knew there had to be something for the guys and something for the girls. Pussy and penis. And the edited version of that was ‘property.’
DJ Kay Gee said the record felt like a turning point coming out of the sessions. ‘You never know if something is going to be a hit, but with ‘O.P.P.’ we just had a feeling. Everybody who heard it, loved it. We knew it was 10 times better than [The New Style’s lone 1989 single] ‘Scuffin’ Those Knees.’ And it did really well at live shows, with the call and response. We knew we had something, but we didn’t know how big it was. We just had to find a label.’

Enter Tom Silverman, Tommy Boy’s founder who said ‘it was definitely a natural hit, just like Afrika Bambaatta’s 1982 ‘Planet Rock’ was for the label, back in the day. The Michael Jackson factor was a big part of it. It had ‘double hooks’: a call-and-response hook on the chorus, and a musical hook with the Michael Jackson. If you have two hooks on one song, it’s almost guaranteed to work.’

Naughty by Nature went on to release five more albums.