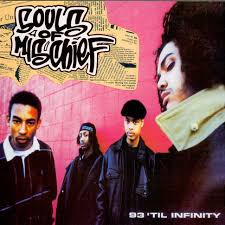 “Now we feel the good vibrations”⁣
⁣
Californian group, the Souls Of Mischief, entered the game during a transitive period in hip-hop. The genre was shifting from being in the thralls of hardcore gangsta rap, to blossoming as a more conscious and politically important movement. The golden era was in full effect, with the likes of the Wu Tang reigning supreme on the East coast, and Dr. Dre and Snoop Dogg blowing up the West Coast. 1993 was the crux of this hip-hop metamorphosis, and the genre was in a state of flux. Tupac was telling black women of America to ‘Keep Ya Head Up’, while The Geto Boys reminded those same women that ‘This Dick’s For You’. As Queens-born LL Cool J popped ‘14 Shots To The Dome’, fellow Queens residents, A Tribe Called Quest, were prescribing some ‘Electric Relaxation’. Shit was changing. Among the deafening noise from legendary names on both sides of the country, emerged the Souls Of Mischief. Four high school kids that had formed just two years prior, were making something very different. Away from the horrorcore references to violence, and beyond the derogatory approaches to sex and relationships, the Souls Of Mischief rapped primarily of their reality. They left the gritty streets and hectic back and forth behind them with the aim to, “up you on how we chill”. 93 ‘Til Infinity was, and is, a cool, laid-back breath of fresh air, or perhaps inhale of Cali’s finest green. Rapping with understated energy, playing with syllables and finishing each others sentences, all while spinning sharp tales of rolling fat joints, taking a girl to the movies, hiding from the cops and shopping for some ill fits at the mall. These boys provide insight into teenage life over sparkling marimba tones and a soulful sample from funk band, Graham Central Station. In the chaos of hip-hop’s golden age, four teenagers carved some sanctuary from the storm. Youth comes but once in a lifetime, and here is a perfect capsule of it. Depending on your current situation, listen and indulge in the memories, or appreciate the time of your life right now. Either way, get the rolling papers…⁣
Please follow for more.
Writer: @hook_ones_
Instagram: @hook_ones_
https://www.instagram.com/hook_ones_
Category: Uncategorized
Leave a Reply Cancel reply